Sir Minty captured this warbird at North Shore Airfield on 16-10-2010.
It was originally shown in the following blog:-
http://nzcivair.blogspot.com/2010/10/two-north-shore-warbirds.html 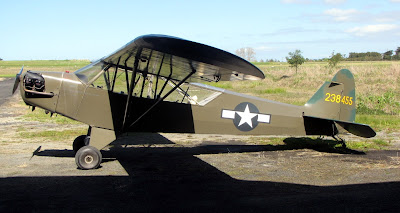 I recently had contact with Harry Noyes who sent the following:-

"Today, on a whim I hunted down an old friend on Google and found her on your blog,

Of all the planes I ever flew, my favorite was J-3 N62052 (and the only one whose tail number I can still remember without looking at my logbook ). I am so delighted to see that she is still alive and dressed in her youthful warpaint. If only I had aged as well. She was yellow when I knew her, of course, while attending graduate school at the University of Hawaii. She was a toy basically, with absolutely no practice utility in Hawaii (I tried to get over the mountains to the North Shore one day and the plane's rate of climb wouldn't overcome the downflow from a north wind over the peaks), but God what fun! We were allowed to make touch-and-go landings at Ford Island in Pearl Harbor and flying over that area with the windows open was always a thrill. Once I saw a carrier entering harbor below me, another time a nuclear sub. Once, while I was still learning to fly taildraggers, she started running rough when we leveled off after take-off. We turned back to Honolulu International and I landed with a slight bump (you don't land very hard at 25 mph unless you do it upside down, and with Hawaii's winds I sometimes landed at about 5-10 mph ground speed) and the engine stopped. That also killed our plug-in walkie-talkie radio, of course, so we couldn't explain anything to the tower. I have always imagined that the controllers must have rolled on the floor laughing as they watched my instructor and me jump out and start pushing that teeny yellow plane off the runway onto a cross-taxiway. Thank God, it started back up when we propped it or we would have had to push it about a mile to the ramp. Anyway, I figured out that the problem was the crude gas-gauge and fuel-tank drain arrangements. The gauge consisted (from the photo, it looks as though it still does) of a wire with a cork on the end that floated on the fuel with the wire sticking through a hole in the gas cap. This let water run into the fuel when it rained, which it usually does several times a day in Hawaii. Of course, we always drain the gas tank before flying to check for water. But apparently in the Cub, someone made a bad decision to put the drain in the middle of the tank bottom instead of the rear end of the bottom. Thus when the plane's nose was pointed up (almost all the time, of course, with a Cub), water could settle in the undrained corner behind the drain pipe. After that, we always lifted the tail into the air when draining the gas tank. I think I owe some of the most precious things in my life to Piper 62052. I was chasing a girl who didn't like me much, but didn't totally reject me because she wanted a ride in that airplane. By the time she got it, she had agreed to marry me. True, she fired me from my husband job 20 years later, but meanwhile we had had two incredible kids. My daughter just got married and my son is a foreign service officer, now studying Russian before going to the U.S. consulate in St. Petersburg. If it weren't for 62052, they might not be here. On such things do the fates of men hang sometimes. Thank you for posting her photo, and if you can, please advise the owners how grateful I am that they have preserved my old friend from 40 years ago.