The Midget Mustang is one of the most admired and enduring homebuilts ever. Its lines are still amazing today, 63 years after it first flew!

The Midget Mustang was designed by Piper Chief Engineer Dave Long as a Goodyear midget racer, and the prototype first competed in the 1948 Cleveland Air Races. There were plans for production by Schwiezer but these never eventuated after Long's untimely death in 1950. All rights and tooling were sold to Robert Bushby in 1959 and he marketed plans and kits until 1992, when he sold the rights to Mustang Aeronautics, who still market the aircraft today. There have been around 400 built worldwide.

All photos are from the Keith Morris collection except as noted. 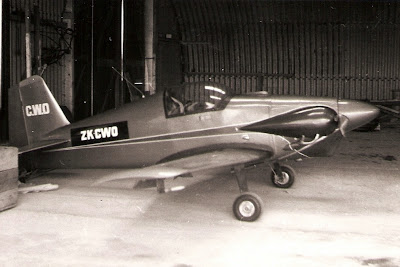 Our first Midget Mustang was Harold Blair's ZK-CWO (c/n AACA/22/1), which was registered on 7/2/68. Harold Blair of Wellington was a very early member of the AACA (member number 22), and he was a panel beater. I guess this is why he built in metal and ZK-CWO was the earliest metal homebuilt in New Zealand in an era of Turbulents, Taylor Monoplanes and Jodel D 9's. ZK-CWO was completed in late 1972 and assembled at Paraparaumu where I took this unfortunately slightly blurry shot in November 1972. It was painted in a 2 tone metallic blue colour scheme. 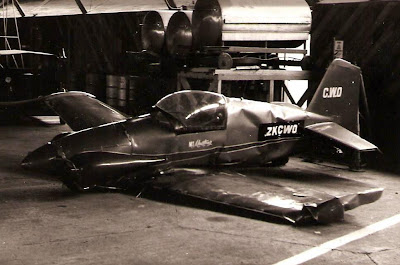 As I recall from newspaper articles of the time, Mr Blair invited many of his friends to his first flight in ZK-CWO on 9/12/72, and there was a photo of him with his aircraft in The Evening Post newspaper. Unfortunately he ran through some puddles on the runway on take off, and crashed in the lupins adjacent to the airport. Mr Blair was not hurt but ZK-CWO was badly damaged as shown in the above photo taken in the old CAA hangar at Paraparaumu in early 1973, and it was cancelled on 2/8/76. A sad end to a pioneering homebuilt aircraft. Does anyone else have any other photos of ZK-CWO they would like to share? If you do please contact Blue Bus as above. 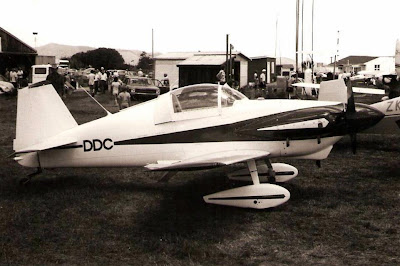 Our next Midget Mustang to appear was ZK-DDC (c/n AACA/107/1) which was built by Jack Reeves of Ngahinapouri, near Hamilton and was registered on 24/7/75. Jack was a former NZ aerobatic champion and newspaper articles of the time quote Jack as saying ZK-DDC cost him around $6,000 in material costs to build. It is photo'd here at the 1976 AACA flyin at Kaikohe 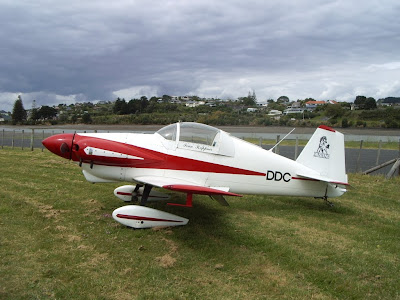 ZK-DDC has only had 2 owners as Jack Reeves sold it to Ivan Krippner of Te Awamutu on 6/8/91 and it is photo'd here at the November 2006 Black Sands flyin at Raglan, now with some artwork on the tail. 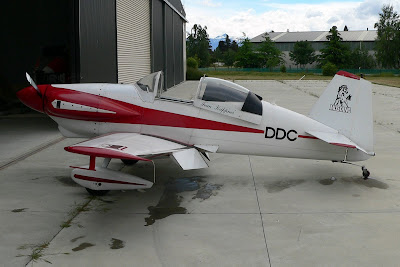 Ivan krippner moved to Cromwell and took ZK-DDC with him, where it is on the flightline withClassic Flights at Wanaka, where Blue Bus photo'd it in November 2010. It now has a black patch behind the cockpit and #1 on the wing, but it has hardly changed at all in 36 years. 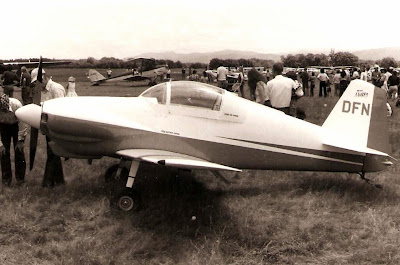 The next Midget Mustang to appear was ZK-DFN (c/n AACA/111/1) which was built by brothers Philip and Jack (?) Keen of Te Kowhai who registered it on 14/1/77. I think it was built using the same jigs as ZK-DDC. It is photo'd here at the 1977 AACA fly in at Masterton 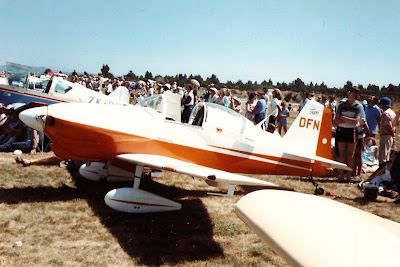 As can be seen in this photo from the 1982 AACA fly in at Taupo, ZK-DFN was painted orange and white. It has had even fewer owners than ZK-DDC as it was cancelled on 18/12/92 and exported to Australia as VH-DFN, where it is still current and is still owned by Philip Keen. It still looks almost exactly the same except for the VH registration.
Posted by Sir Minty at 19:31