ZK-HNY destroyed in the Ukraine.

ZK-HNY at Nelson on 05-12-2007 whilst on delivery to Milford Helicopters. Photo by Peter Campbell.

Registration History for ZK-HNY/3
Aerospatiale AS350B2 Ecureuil
c/n 4306
ZK-HNY3 was registered on 29/11/2007 to Milford Helicopters Ltd, Te Anau.
Delivered through Nelson on 05-12-2007.
26/05/2008 Registration cancelled as exported
Became UR-ATOL 00/05/2008 with Atoll Holdings of Kiev, in the Ukraine
On 21/01/2009 it was destroyed by fire near Bogorochani in Ivano-Frankivsk Oblast,
Ukraine after it had crashed killing the two occupants on board. 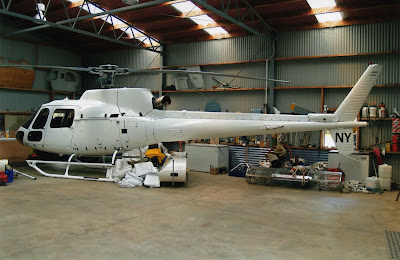 ASN Wikibase Occurrence # 58552
Narrative:
Crashed in a field and burned. The helicopter when reg. in the Ukraine was destroyed by fire after it had crashed on 21.01.2009 killing the two occupants on board near Bogorochani in Ivano-Frankivsk Oblast. It was reported en-route from Uzhgorod to Ivano-Frankivsk.
Below is an article from a Russian newspaper report translated using Bable-Fish translator.

On [Ivano]-[Frankovshchine] with the fall of helicopter perished 2 people
Many thanks to Bob Kerr for compiling and forwarding this report, and my regrets that the photographs will not paste over for some reason
Posted by Dave Paull at 22:17