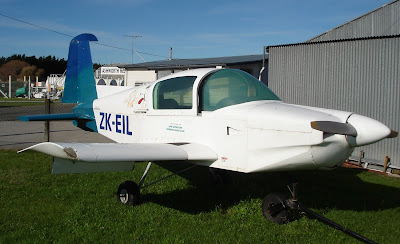 New Zealand Aerospace Industries Ltd of Hamilton where the agent for the Grumman American range of light aircraft around the 1970's. One particular AA-5 Traveller they imported was c/n AA5-0749 which became ZK-DLG on 22-05-1975. It eventually was listed to the NAC/BP Flying Club at Wellington on 14-04-1977, which later became the Air NZ/BP Flying Club. In the early 80's it was withdrawn from use due to delamination of the bonded wing panels. It was cancelled on 19-08-1983 and sat in the back of the East Aviation/Wellington Aero Club hangar until being purchased by John Reid of Reid Aviation/Air Gisborne. I believe the center section of this airframe went into a rework and life extension of ZK-JER (John's initials). The left over became this daintly little creature "ZK-EIL" which is sometimes used by the local crash fire team.
E.I.L are the commercial arm of the Gisborne Community Trust which started with the local electricity Company and now includes the Port of Gisborne, Gisborne Airport, and owns Flightline and Skysales, among others. 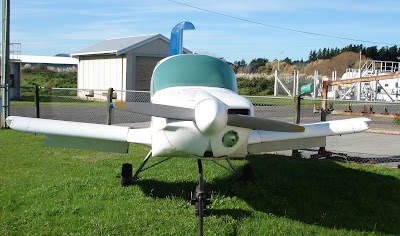 Now the real ZK-EIL was a Piper PA38-112 Tomahawk with Airwork Ltd for but was only around for a couple of weeks in January of 1979 before being re-registered as ZK-WAD for the Waitemata Aero Club. It is still current with Thom McCready in the Reparoa area.
Posted by Dave Paull at 22:14