Following on from the original blog at

http://nzcivair.blogspot.com/2011/06/question-time-130.html
I am still not fully convinced that the nearest aircraft is ZK-CEW and the other is ZK-CKP.
I have a problem in that ZK-CEW was listed to Mount Cook Air Services on 23-05-1963 and crashed on the Albert Glacier on 23-10-1965.
ZK-CKP went to Mount Cook Air Services on 16-03-1965 and remained as a ski plane until late 1987.
So there was roughly a seven month period when both were operated at the same time. 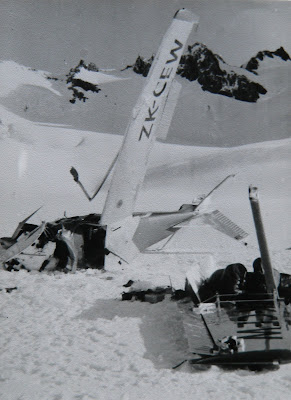 The only positive photograph I have of ZK-CEW comes from my shoe box of misc photos from unknown persons.
Written on the back of this B&W print  is:-
"Cessna 185 ZK-CEW. Crashed on Albert Glacier after severe turbulence stalled the 'down' wing in a steep turn 500 foot above the snow.
Note: two passengers in sleeping bags on the wing in foreground"
The colour scheme looks about right with the original pic re-posted below..

The more distant aircraft (ZK-CKP) is shown below in a shot taken at Timaru on 14-03-1966. (after my return to NZ)
This also fits in pretty well with the original QT 130 shot. 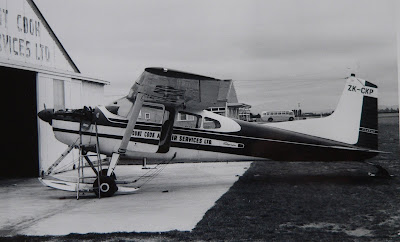