It has taken me a while to get back to posting some more from Ardmore last Sunday - busy week!

Another hangar that was open was the one beside the Thunder Mustang hangar, and there were several immaculate aircraft inside, all owned by the Kaipara Aviation Trust of North Shore. 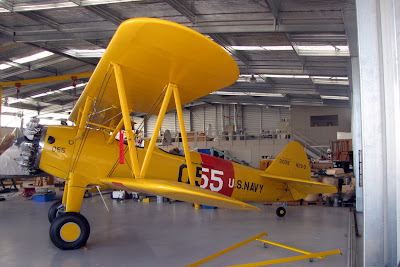 The first was Stearman A 75N 1 ZK-BWR which had probably the cleanest engine I have ever seen. It is ex N 52648 and was first registered in New Zealand on 21/6/07. It was fastidiously rebuilt at Blenhiem by Stuart Tantrum and flew again in January 2009. 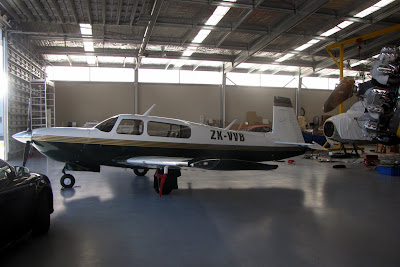 And the second was our only Mooney M 20R Ovation, ZK-VBB - a very smooth aircraft.
In the background is a Lockheed L 10 Electra rebuild which is quite advanced. I understand this will become ZK-AWR for Rob Mackley.
The Kaipara Aviation Trust also owns the immaculate red Cessna o1H Bird Dog ZK-DOG.
Posted by Sir Minty at 20:42