Zenith CH 601 XL ZK-SWW Back in the Air Again 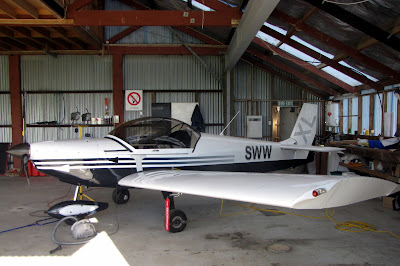 I photographed Zenith CH 601 XL ZK-SWW in its hangar at Ardmore on Sunday 29 June. ZK-SWW was built by Aaron Skidmore and Peter Whyte and was first registered on 8/11/07. It is owned by the Skidmore Whyte Whyte Partnership, hence the registration. Peter Whyte has since imported Vans RV 9 ZK-RVY. Aaron told me that he had just finished incorporating the mandatory wing strengthening modification for Zenith 601's. He reckoned that it would have been easier to build a whole new wing! You can see a strengthening gusset on the side of the fuselage too.
The Zenith CH 601 attracted a lot of unfavourable publicity in 2008, when several examples suffered wing failure. The designer Chris Hientz calculated that the wings did not require strengthening however after the continuing controversy he did a U turn and approved the wing strengthening, which is now mandatory for most models of Zenith 601's. In New Zealand these aircraft are being progressively modified
Posted by Sir Minty at 20:05