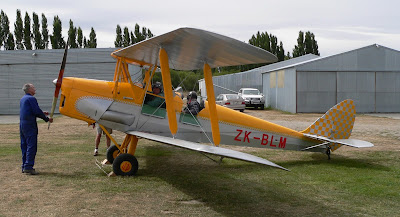 A first sighting for me is this local Christchurch De Havilland Tiger Moth ZK-BLM (c/n DHNZ164). Built by the DHNZ factory at Rongotai it went to the RNZAF as NZ1484 in April of 1944 and joined the civil register on 22-05-1955 as ZK-BLM with R G Bush of Bush Aviation in the ag role. It had a wire strike near Alexandra on 28-01-1956 but I believe continued work until it was cancelled about 1960. It was stored at various sites over the years until rebuilt (and correct me if I am wrong) by the late Ray Goulden to rejoin the register on 05-09-2007 with Claymore Ltd of Christchurch. Above we see Pat Scotter about to flick it into life. 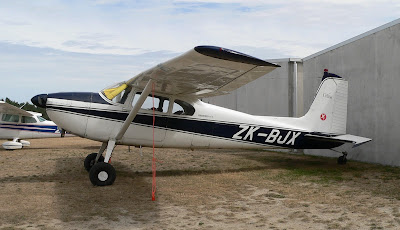 Also on the tie downs was this Cessna 180 ZK-BJX (c/n 31417). A Rural Aviation import first listed on 18-04-1955. It was delivered to Barr Brothers. Now some six owners later it it registered to Sam Stephenson originally at Blenheim but now of Christchurch.