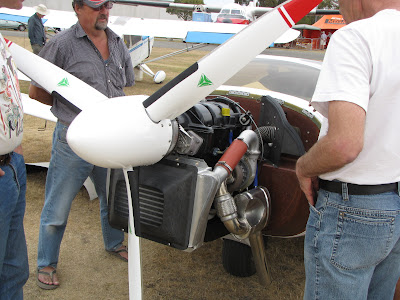 One of the crop of interesting new aircraft at the SAANZ flyin at Ashburton was this Europa ZK-ZEB, which was built by Peter Austin of Whitianga. It was first registered on 11/2/08 and had just flown off its restrictions in time to fly to Ashburton.
Some of the major interest in this aircraft was in its engine, and the cowlings were off nearly all day Saturday while the builder explained the engine installation to a steady stream of interested homebuilders. The engine is a Wilksch Airmotive watercooled 3 cylinder diesel which is both turbocharged and supercharged, and runs on Jet A1 fuel. It has flown successfully in several aircraft overseas.
Thanks to Blue Bus for the photo of ZK-ZEB with its cowlings on. The lower photo shows more detail of the engine installation.