Sindlinger Hurricane at Ashburton and Previously 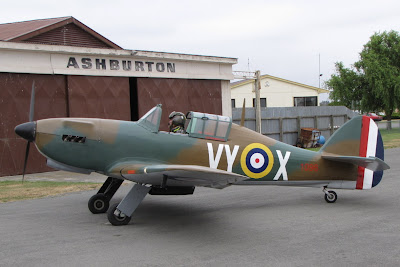 Yet another interesting sport aircraft at Ashburton was the Sindlinger Hurricane ZK-VYX (c/n 1096), shown here with a period backdrop. This is a 5/8 scale replica powered by a 3 litre Mitsubishi engine of 160 horsepower. It was first registered to Bob Gibson of Dunedin on 14/10/04 and is still flown by him. It was one of the most active aircraft in the circuit on Saturday. 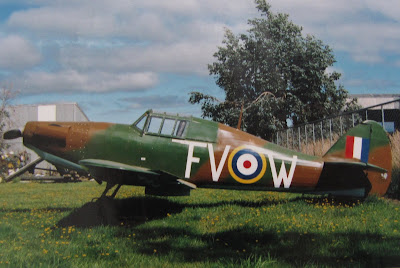 But I think the origins of this aircraft go back much further than 2004. I seem to remember that it was first at least partly constructed by Alex Turner in Dunedin back in the 1980's. I have this photo taken at Taieri some time in the 1990's of ZK-FVW (when it had the c/n AACA 635/2). (Apologies for the quality of the photo but I just took it with my digital camera on macro setting). This aircraft was registered 0n 7/90 and was withdrawn from use in Blenhiem in 9/95 where it was being rebuilt. I seem to recall it was painted black when it was at Omaka.
Does anyone know anything more of the history of these aircraft and whether ZK-FVW and ZK-VYX are the same aircraft?