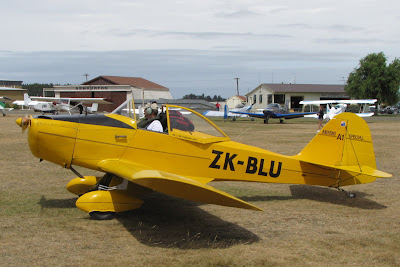 I think I will make this my last post from the SAANZ flyin at Ashburton last weekend. There were lots more sport aircraft there but maybe there can be too much of a good thing?

The subject for this post is the Andrews A1 ZK-BLU. This aircraft is interesting because it is the oldest post WW2 "amatuer built" aircraft in New Zealand. It is currently owned by the Andrews Partnership at Blenhiem, and it has been owned by various owners in the Blehiem area since 1983. It was originally built by Mr C G Andrews in Wellington as a Tiger Moth topdresser replacement, but the project didn't get past one aircraft. It first flew in 1957 but then was inactive at Rongotai for many years. It was rescued by Alan Rowe of Masterton who refurbished it and it was quite active in the AACA flying scene in the 1970's. I have kept up with it for many years. 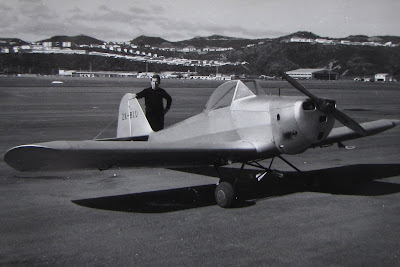 I first photographed the Andrews A1 at Rongotai in the early 1960's when it was overall silver with red registration letters. As a student of Rongotai College I always saw it tucked in the back of the CAA hangar gathering dust. Then one day it appeared, taxied to the aero club, filled up with fuel, then went back to languishing in the CAA hangar. This is the photo I took of it that day, probably the first photo I took of a "sport aircraft".