Another very interesting sport aircraft in the Aero Technology hangar at Ardmore last Friday was the Pitts S 1F ZK-RTP.  It is many years since I had seen this aircraft so it was great to see it in fine condition.  I have posted on this aircraft previously in my series on Pitts Specials of New Zealand at:  https://nzcivair.blogspot.com/2011/11/pitts-s-1-specials-of-new-zealand.html 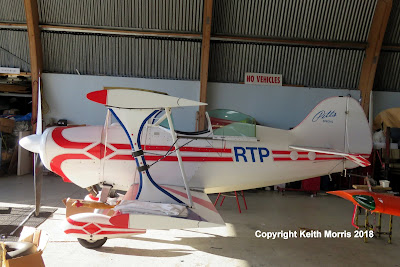 ZK-RTP (c/n AACA/716) was built by Ray T Philpott of Rotorua and was first registered on 18/5/87.  It originally flew as a S 1C model with ailerons only on the lower wings and sometime in the late 1990's Ray Philpott built symmetrical airfoil Falcon wings for it with four 25% larger ailerons and square wingtips, and a sprung aluminium undercarriage.  Ownership passed to Dave Monds of Palmerston North on 22/10/10 and then to Sam Elimelech of Porirua on 23/6/15.

It has recently been purchased by Blair Sims of Auckland, on 21/5/18, and he is having the aircraft checked out by Aero Technology before boring holes in the sky in it.
Posted by Sir Minty at 20:12