The next of the many types of sport aircraft to appear in New Zealand in the early 2000s was an example that we have had only one of - the Fly Italia MD 3 Rider.  This aircraft was designed in the Czech Republic by Jaro Drostal and the first prototype flew in 2004.  It was originally built by GRYF Aircraft in the Czech Republic for Fly Italia which was based in Dovera in NW Italy but this arrangement stopped in 2006 and when Fly Italia went into receivership in 2011, the aircraft continued to be built by Next Aircraft of Rivanazzano also in NW Italy (almost next door).  The aircraft was marketed as the Sport Rider in the US.

The MD 3 Rider is a conventional all metal high wing side by side with a steel fuselage frame and rivetted aluminium rear fuselage and tail, tailplane and wings.  The curvy bits are from composites including the cowlings, doors and wingtips.  One difference is the forward swept wings.  the aircraft's length is 5.9 metres (19 feet 4 inches) and the wingspan in 9.0 metres (29 feet 6 inches), with a wing area of 106 square feet.  Empty weight is around 287 Kg (663 pounds) and MAUW in NZ is 472 Kg (1,042 pounds).  With a 100 HP Rotax 912ULS cruise speed is around 115 mph, while the stall speed is 40 mph. 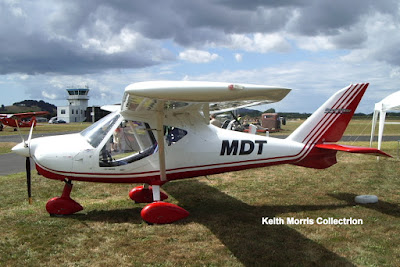