Yesterday Avspecs registered their second Mosquito restoration as ZK-FHC2 .  The registration reflects its ownership by the Fighter Heritage Collection of Everett,Washington.

I was at Avspecs yesterday at the end of my road trip from Wellington, and Warren Denholm told me they are on track for a first flight towards the end of August.  He also said that it would be undergoing flight testing for around 2 weeks before being shipped to America.  It sure looked great and is currently in all silver.. The tailwheel is in place and the main undercarriage only seems to require the main wheels.  See Avspecs Facebook page at https://www.facebook.com/Avspecs/ 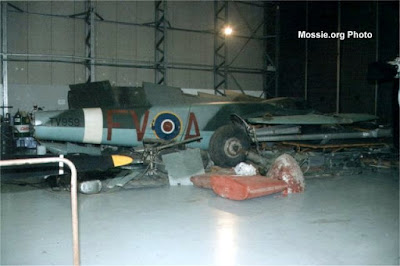 I guess the colour scheme of TV 959 is a closely guarded secret but this is how it looked at Duxford in 2003, before it was shipped to New Zealand.

T.III TV959 was built at Leavesdon in 1945 and delivered to 13 OTU at Middleton St George on 29th August 1945 coded KQ-G.
The aircraft then had a varied career, going to No. 266 Squadron on 31st October 1946, 54 OTU at Eastmore on 24th April 1947 and 228 OCU at Leeming on 17th May 1947. Here it remained until being delivered to 22 MU at Silloth on 20th september 1950 for maintenance and storage.
TV959 was then issued to 204 Advanced Flying School on 15th July 1951, where it received some damage which was repaired by Brooklands Avaition Ltd at Sywell following which it went into storage again at 27 MU at Shawbury on 6th February 1952 until 15th May 1952 when it was issued to the Home Command Examination Unit (HCEU) at White Waltham.
After periods at 49 MU from 20th August 1953 and 27 MU from 16th November 1964, it returned to HCEU at White Waltham on 16th December 1955. After a short period with the HQ's Fighter Command Communications Squadron, its final service duties were with 3 CAACU at Exeter coded 'Y' from 30th April 1959, until it was struck off charge on 31st May 1963.
Lent to Film Aviation Services, TV959 was used for the cockpit and ground sequences of 633 Squadron at Bovingdon where it was coded HT-P and given the serial MM398. Following completion of filming, TV959 was allocated to the Imperial War Museum for preservation.
In order to fit it into the restricted space at South Lambeth, the starboard wing inboard of the engine was sawn off, but retained and the aircraft was suspended from the ceiling. In recent years the aircraft has been moved to Duxford where it is in storage with The Fighter Collection whose long-term plan is to return it to flying condition.

As we know, TV959 is now owned by The Flying Heritage Collection and will very shortly become the third Mosquito to fly in the 21st Century Mosquito revival.  We aviation enthusiasts live in exciting times!