Arriving at Auckland around 2220 on 22 September was this BK117 VH-RLI. Registered to Helicorp Pty, the BK117 B-2 made the journey from Noumea via Norfolk Island having arrived in New Caledonia the previous day from Port Vila.
This helicopter, c/n 1018, started life as JA9940 and was imported to NZ to become ZK-HNE with Garden City Helicopters in May 1997. It was cancelled in the June of 1998 and was exported to Australia where it was first registered VH-RLI. It again returned to NZ and this time took up the marks of ZK-IMN with Heli-Works in March 2009. As ZK-IMN, the BK117 was noted flying flying from Coffs Harbour to Maroochydore and Proserpine on 24 March 2009 and to Hamilton Island and Cairns the following day. On 26 March 2009 the BK117 continued north to Port Moresby and it was cancelled from the registered to again become VH-RLI on 01 January 2010.


It has since returned to NZ on re-delivery to Garden City Helicopters of Christchurch. 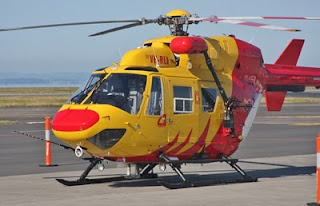