Out in the sunshine following maintenance at Rangiora today (22-10-2010) on its Hamilton Standard propeller was the North American Harvard 3*  ZK-XSA [better known on the airwaves as Harvard Six Zero]. Above : Preflight by Don Penniall. 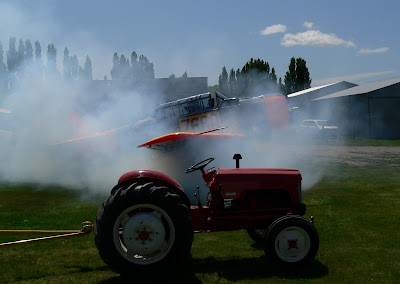 Start up and clearing its tubes - I guess its old enough to smoke at sixty nine years or so - A product of 1941 for the USAAF for transfer to the South African Air Force. After demob from the SAAF it arrived in NZ in October of 1996 for the Graham Orphan, John Kelly Syndicate of Blenheim, being registered as ZK-XSA on 21-11-1996. It first flew in NZ the next day at Ardmore. It was re-listed to the Harvard 7660 Syndicate on 22-03-1998 and has been based at Forest Field for some time before a short spell at Christchurch International and then a move to NZRT into its own hangar more recently.

A quick test flight and some aerobatics out west, followed by a couple of circuits confirmed that all was well.

Resting against the hangar wall are these plate.
There is a vacancy in the Harvard 7660 Syndicate if you are interested !
Posted by Dave Paull at 17:24