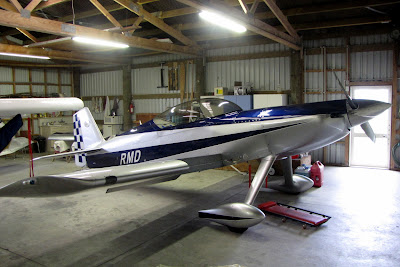 In my previous post on RV's, I mentioned the two Harmon Rocket 11's that are in New Zealand. One of those is ZK-RMD that was built by Dave Simpson and is hangared at North Shore. This impressive aircraft has been flying for nearly 2 years but I have only ever seen it in its hangar. Dave Simpson originally started off to build his Rocket from a kit in the mid 1990's. The Rocket 11 is only about 20% RV 4 with a wider fuselage and a shorter wing, strengthened rear fuselage and a raised turtledeck to fair into the revised canopy. It also has a Continental O 540 6 cylinder engine driving a larger propellor, and the landing gear is longer to allow for this. A smooth aeroplane.

There is one other Harmon Rocket 11 in New Zealand, being ZK-TWU of Andrew Fairfax in Queenstown. Can anyone post a photo of ZK-TWU (or Andrew's other planes RV 4 ZK-JRX or Spezio Tuholer ZK-JRZ)?

One other interesting aircraft being built in the hangar was a Thatcher CX 4 which is a small low wing all metal single seater with a Volkswagen engine. You can just see the wingtip in the back of the photo.
Posted by Sir Minty at 18:14