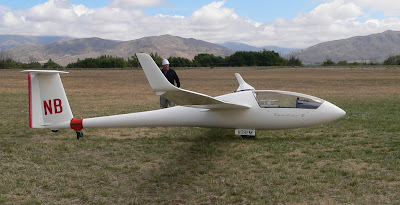 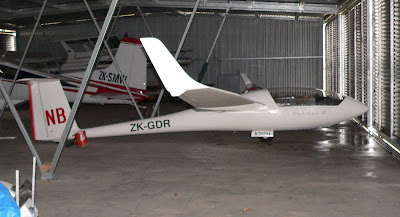 I popped into Omarama just as the rain had ceased on December the 10th. All the gliders were tucked away in the hangars. Two of interest being shown here.
Above is the recently registered (02-12-09) Schempp-Hirth Ventus 2b ZK-GDR (c/n 14) listed to Sailplane Services of Drury. Its previous US registration of N39EM is still visible on its undercarriage door with the "NB" letters being the US owners competition ID. It has been in NZ for a couple of years now - the top pic was taken at Omarama on 31-12-2007 whilst it was listed on the US register to John Iacobucci of Grand Rapids, Michigan. Its US registration was cancelled on 30-10-09.
Below is the UK registered Schempp-Hirth Ventus 2c G-CHWA (c/n 8). A 1996 production glider, it was listed to Chris Garton as G-CHWA on 27-05-2008 having previously been on the BGA (British Gliding Assoc) register as BGA4251. About two years ago UK gliders began being moved over to the general "G" register, so that now they are listed with the powered aircraft. Chris has been gliding since about 1965 and in a high houred regular Omarama visitor. 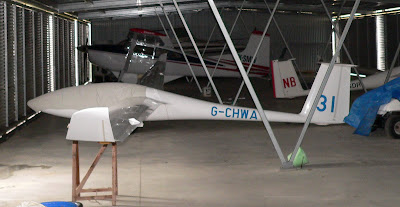 On a much brighter day at Alexandra 13-12-2009, the Central Otago Gliding Club was out to play. 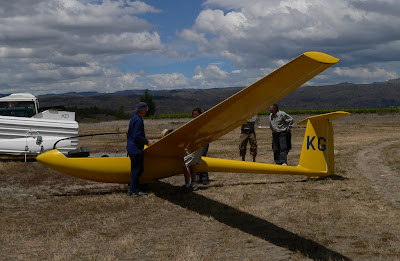 Molino PIK20 ZK-GKG (c/n 20067) had just been assembled and was having its duplicate inspection done before being winch launched. I nearly purchased this one in 1993. It has been with John Robinson since June of 1999 - Thats him in the blue overalls. 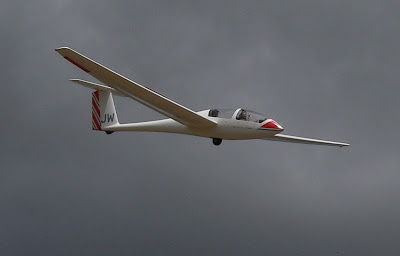 The Central Otago Clubs trainer is the Grob 103 Twin Astir ZK-GJW (c/n 3009) seen here on short final after a px ride. I wouldn't mind a beer for every circuit that I have done from the back seat of this lovely olde girl.
Posted by Dave Paull at 20:36