Following up on the posting about the Rearwin ZK-ALF/ZK-AGQ, we have received an inquiry about the Rearwin that was at one stage was owned by Ivan East of Wellington before being passed on to the NZ Sport & Vintage Aviation Society Inc., Masterton.
This Rearwin was 9000KR c/n 656D, built 29Jan1940.

It intially went to Australian National Aircraft Pty.Ltd. of Australia where it briefly became VH-ADL and was passed on to a P H Burton before export to New Zealand where it was registered as ZK-AHN with the Auckland Aero Club at Mangere.
The Rearwin was impressed into the RNZAF as NZ569 from 12Oct1942 and survived the war to be restored @3315hrs for £100 back to the Auckland AC with the new registration of ZK-AKA.
In due course it was sold on to a succession of private owners in Feilding, Timaru, Balclutha and Kawhia until becomeing the property of John Caston of Auckland in the early 1960s.

ZK-AKA in the private onwners hangar at Ardmore 24Jun1967. On the left is Turbulent ZK-BWE, also owned by Mr Caston, and on the right is the Dragon ZK-AXI which had crashed at Ardmore two months previously. Silver with red trim and black registration. 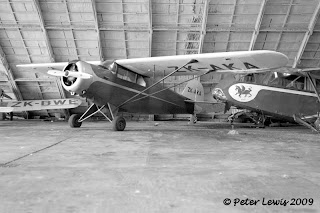 Ownership passed to Ivan East of Wellington as from 6Nov1968 after it's last recorded flight Akl-Wtn 5Oct68. The Rearwin was later transported from WN to MS by road and became the property of Sport & Vintage as from 12May1989.
It is currently recorded as 'stored' - can anyone update us on the actual status of this project?

As a further comment, four Rearwin were imported. One of these aircraft, 9000L ZK-AGS/ZK-AIP, crashed Tasman Downs 28Mar56 and the other three seem to still be extant. A 75% survival rate over seventy years is quite something.
Posted by flyernzl at 20:39