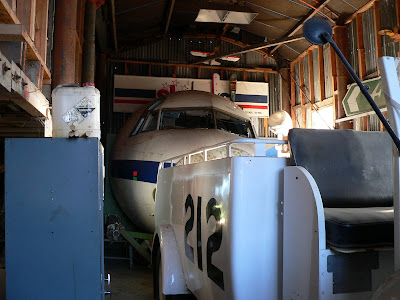 You night owls are too good. I will have to rat around and find something harder.

It is indeed the Ferrymead Museums nose section of Lockheed L188 Electra ZK-TEA , c/n was 2005.

It arrived in Auckland on 19-11-1959 to become listed with TEAL on the 23rd as ZK-TEA. The registration ZK-BMP was initially pencilled in for this aircraft.

Being the first of five it was named "Aotearoa".

The nose section was acquired by Ferrymead and arrived on 22-07-06.

I will be going fishing this afternoon. So if you care to flick me your snail mail address to bluebus@windowslive.com I will mail you one.
If per chance you are at Charlie Drapers strip today - the Blue Bus will be in attendance.
Posted by Dave Paull at 07:37