Despite this grand old aircraft being imported into NZ in 1953, today was the first time I have seen ZK-BDB in the flesh. At Ardmore 9/9/09, but a little bit later in the day than 9.09am! She's looking good after all those years. 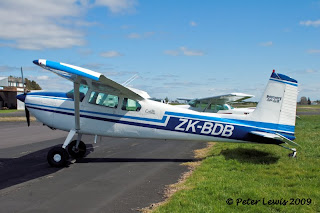 ZK-BDB was first registered to Manawatu ATD Co.Ltd., Feilding, 9th October 1953 and went straight on to agricultural operations. Seen here at that time in a photo from the Ed Coates collection: 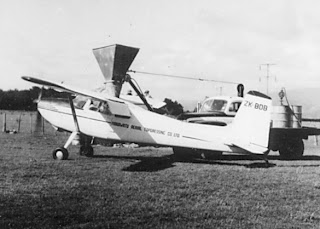 This 180 was passed on to Rangitikei Air Services Ltd. of Taihape in March 1962 and a short while later worked for Northern Air Services Ltd., Te Kuiti. On 27th October 1966 ZK-BDB crashed at Te Anga. The airframe was recovered and later rebuilt by Rural Aviation and registered to them with the new registration of ZK-CWL as from 5th March 1968. The newly rebuilt aircaft is seen here outside the Rex Aviation hanger at Ardmore 14th September 1968: 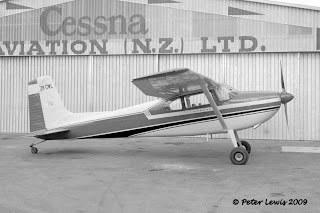 ZK-CWL was then sold to the Hawera AC in December 1968, and over the years moved around various private and corporate owners in the North Island apart from a brief sojurn at Omarama in the mid-1980s. Craig Stobbs of Arisaig Ltd., Wellington bought ZK-CWL in January 2000 and restored the aircraft back to being ZK-BDB in February 2003.
Patchett Ag-Air Ltd. of Blenheim took over ownership in May 2004, and it still carries their logo under the current ownership of Clevedon Aviation Ltd. which I understand is operated by David & Jill Phillips.
Although ZK-BDB can boast of being the longest lived NZ 180, she's not exactly the oldest current 180 resident. That distincition goes to ZK-WGT, the Cessna 180 owned by G W & M W Thompson of Otorohanga, though that aircraft has only been in the country since 2007. Next up in the long-liverty stakes is ZK-BKG an ex-Wellington AC machine. Although arriving here as a new aircraft, ZK-BKG seems to have been bought into service rather later than ZK-BDB.