Wayne Grant spent a couple of hours at Queenstown today and captured the following: 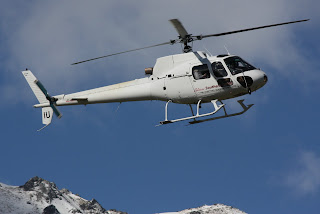 AS350BA ZK-HIU arrived in the country ex Japan and was registered to P & V West Partnership of Queenstown on 28Aug08. It was transferred to Helicopters Queenstown in March this year and wears Glacier Southern Lakes Queenstown Helicopters titles.

ZK-IHW is an AS350B2 model with a long NZ history. Blue Bus may add/correct the following however from the NZ CAA website this machine started life in NZ as ZK-HRO in 1997 before becoming ZK-IPV for a couple of years and then slipping its markings again to ZK-HFV for a while. It is then shown as being exported to Australia where it became VH-ECO (its previous identity before coming to NZ in 1997) from September 2000 until January 2002 when it returned to NZ and became ZK-HXM. It worked with Helitranz for a time before again heading to VH land as VH-FRN however it crashed in the Latrobe Valley in January 2006. Back to NZ, this time with Peter Tait's Heliquip of Appleby, Nelson for a rebuild where it was registered ZK-IBO until October 2007 when it becoming ZK-IHW and took up residence with Heli-works Queenstown where it was photographed today outside their hanger. Phew! What is interesting is the livery and markings it wears "Aoraki Mount Cook Ski Planes".
Posted by MRCAviation at 21:27