Friend of this blog David Eyre has sent some more details of the non-flying Penguin aircraft from Question Time #197.  David writes from Sydney:

The Parnall Penguin, also known as the Marshall Penguin, was designed and built by well known Australian aviation identity, the late Sidney Marshall, in the late 1950s.  Marshall, who was well known at Bankstown, NSW for his charter/joy riding operations around New South Wales with his company Marshall Airways, operated, amongst other aircraft, a Douglas DC-2, DH-84 Dragon, Short Scion, Lockheed 10, an Avro Cadet, and a number of Avro Ansons.  In his hangar and on a property near the airport he had two ex-RAAF Supermarine Spitfires, a Nakajima ‘Oscar’, Messerschmitt Bf-109 which had once been in the collection of the AWM, and was later again obtained by them, three other DC-2s etc, and it is because of his efforts these aircraft have survived.

The Penguin was built as a project, it is said, to teach people to learn to taxi an aircraft.  At one stage it was painted with a cream fuselage with a silver wing and red trim with Marshall Airways appearing on top of the port wing; Joy Flights on the top of the starboard wing, and Joy Flights in red on the tail.  The aircraft received little use and remained in his museum/hangar at Bankstown for many years, sometimes being placed outside the hangar for advertising purposes.  After the death of Mr Marshall, the machine was transferred to the Airworld Museum at Wangaratta, Vic where it remained on display until the museum closed.  It was later sold and exported to New Zealand. 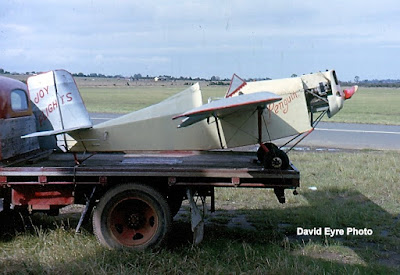 Thanks for the information David.  And thanks too for the above photo of the "aircraft" which was taken at Bankstown on 8/3/63.