It is based on a Bantam B 22 but has several modifications.  John Black told me that the wing was strengthened with an aluminium leading edge, extra stiffeners and an extra rib inboard. The fully enclosed cockpit had Lexan "batwing" doors and the fuselage and wings were covered in Superflight fabric rather that the dacron of the Bantam.  This was as a result of the experience John gained in previously building a RANS S 6 (ZK-VSI).  The engine is a Rotax 582.  Some sponsorship was provided by Michael Erceg who owned Independent Liquor, and hence the Vodka Cruiser logos and the registration.  (Michael Erceg was killed in the crash of his Eurocopter EC 120B ZK-ITH near Raglan on 4/11/05). 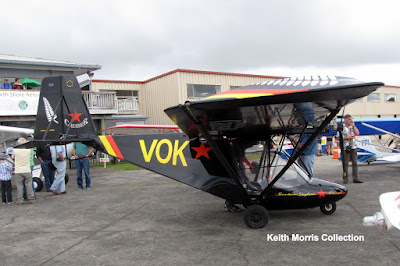 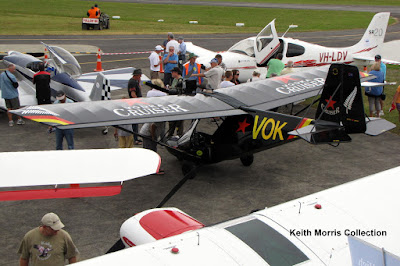 John Black also previously owned Waihi airfield and refurbished the Bristol Freighter ex NZ 5906/ZK-EPC into a restaurant and bar on the field.  (This aircraft is now used as accommodation near the Waitomo Caves).