The Kitfox was developed by Dan Denney in the 1980's as a STOL homebuilt aircraft with folding wings to enable it to be trailered home.  It featured flaperons and a distinctive bump cowl under which it was intended to install a small radial engine.  However the radial engine never eventuated and the early Kitfoxes were powered by Rotax 2 stroke engines.  Dan Denney formed Denney Aerocraft at Boise, Idaho to manufacture Kitfox kits, and more than 5,000 have been produced over the years.

The prototype Kitfox I first flew in November 1984.  Only 6 were produced but the aircraft proved popular and the Kitfox II soon followed.  This had a wider fuselage and an increased MAUW of 950 pounds (436 Kg).  The Kitfox III followed in 1989 and featured a larger fin and rudder and finally the design was developed into the definitive Kitfox IV with a taller fin and rudder and a MAUW of 1,200 pounds (544Kg).  Variants of the Kitfox IV included the Kitfox Speedwing with a shorter wing, and the lightweight Kitfox Lite Squared.

In 1992 the rights to the Kitfox were sold to Skystar Aircraft and they continued with the Series 4, and developed a completely new design called the Series 5 in 1994, which could be built as a tri-gear or a taildragger.  This aircraft kept the kitfox philosophy but was designed for larger engines such as Lycomings or Continentals, and also for the Rotax 912.  The Series 5 had a MAUW of 1,550 pounds (703Kg).  The Kitfox Series 6 and 7 followed, each a further refinement with improvements to the undercarriage, flaps and elevators, and for engines such as the Jabiru 3300.  Now there is a version with the Rotec R 2800 radial engine which in a way has gone full circle from the original radial engine which never eventuated.  Skystar Aircraft filed for bankruptcy in 2005, and the assets were purchased by a former employee John McBearn in 2006 under the name of Kitfox Aircraft LLC, which is still producing Kitfox kits.

As can be seen above, the Kitfox series of aircraft has been continuously developed, getting bigger and carrying more payload, however the Kitfox IV Classic has a length of 18 foot 6 inches (5.6 metres), a wingspan of 32 feet (9.76 metres) and a wingspan of 132 square feet.  The speed depends on the engine fitted, but with a Rotax 912 the Series 5 cruises at 110 mph.

We have had 18 Kitfoxes of various models in New Zealand to date, as follows: 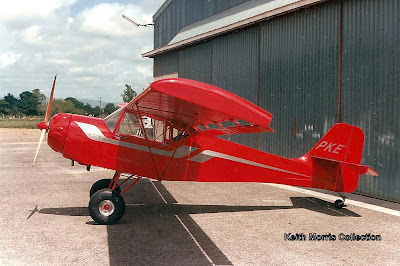 Our first Kitfox was ZK-PKE, a Kitfox II (c/n 387/AACA/539) which was built by George Galpin of Marton and was first registered on 28/2/90.  I understand that it originally had a Rotax 503 engine.  It is photo'd above at Feilding early on in its life.  It is still current and still owned by George (wh also owns Cessna 180 ZK-PKD). 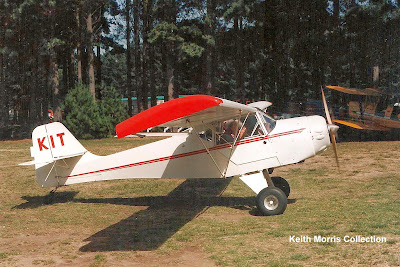 And our second Kitfox also came from the same area.  ZK-KIT, a Kitfox II (c/n AACA/491) was built by Peter Fairclough of Wanganui and was first registered on 15/3/90.  It has a Rotax 582 engine.  It is also still current and still owned by Peter - Kitfox owners must really like their aeroplanes!  It is photo'd above at Foxpine in 1995. 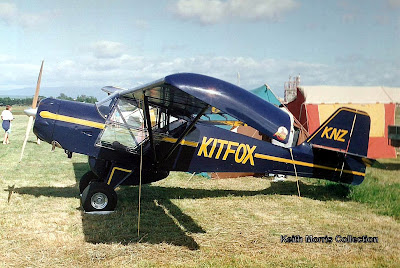 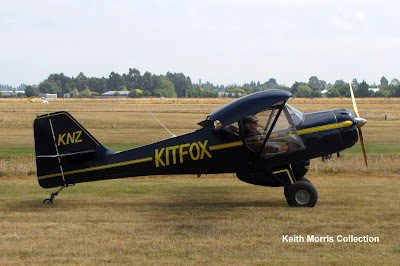 It was purchased by Paul Godfrey of Rangiora on 10/7/12 and he refurbished  ZK-KNZ to flying condition.  It is photo'd above at the 2013 SAANZ flyin at Ashburton where it can be seen that it has not changed much at all over the years. 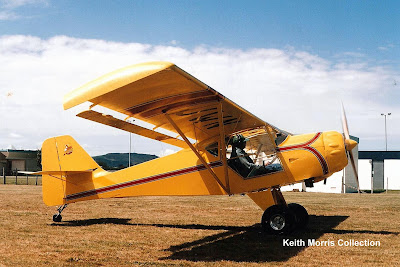 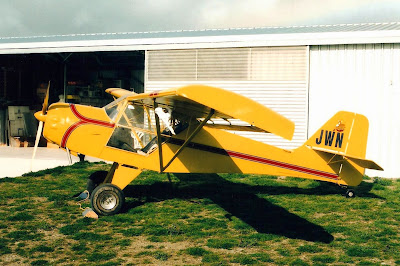 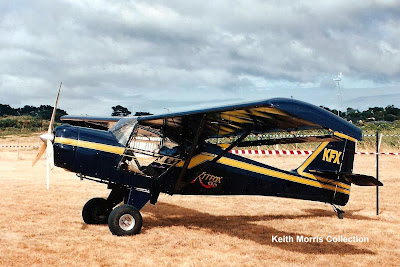 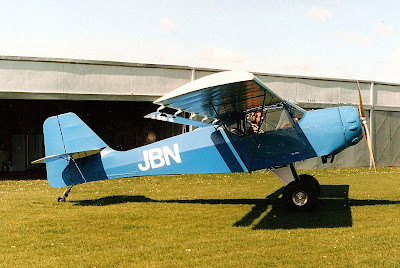