Both ready to go.

Sitting in the rain at Pacific Aircraft Services, Christchurch on 08-10-2013. 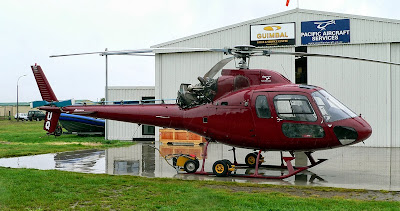 Eurocopter AS 355 F2 Ecureuil 2 ZK-HUQ3 (c/n 5512) of Pacific Helicopters Ltd was having engines run yesterday in the rain. It now awaits an improvement in the meteorological condition before carrying out its first flight in NZ.
A previous post on this can be seen at :-
http://nzcivair.blogspot.co.nz/2012/11/more-new-helicopters.html 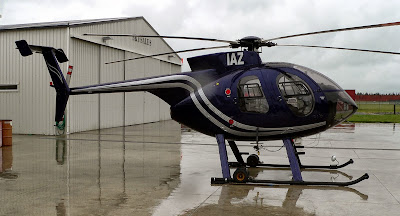 This is what NZ Aviation News said about it :-

"Just arrived and assembled at Pacific Aircraft Services Ltd Christchurch is the Hughes 369E ZK-IAZ2 for Jasra Helicopters of Christchurch. This one had an airworthiness date in the States of April 1986 and was operated as N11KV by Pocohontas Development Corporation of Bleufield, West Virginia followed by Omni Energy Sources out of Lafayette, Louisiana. By the late 90’s it was with Pathfinder Helicopters Inc of Spokane, Washington.  On 03-12-1999 it had a tail rotor strike whilst doing sling work but survived the day and moved on to John Holmes of Jacksonville, Oregon from June of 2006. Final operator was Jim Archer of Northern Pioneer Helicopters of Big Lake, Alaska from June of 2011. It is to replace the Jasra Robinson R44 ZK-IJA which was sold in mid-March to ADT Trust of Queenstown. "
Posted by Dave Paull at 06:47