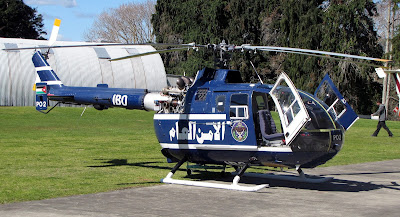 The Jordanian Police Air Wing acquired three MBB BO 105 CBS-4 helicopters in 1989 and used them until they were replaced by four Eurocopter EC635’s, with the BO 105’s being put up for sale in 2010.
These three airframes arrived in New Zealand for attention by Oceania Aviation Ltd and following NZ certification entered the New Zealand civil register in April 2013 as ZK-HVA4, ZK-IBO2, and ZK-IBP­­2.
All three followed the same career paths.
ZK-IBO2 started life as D-HDZK with MBB in 1989 and became P02 with the Jordanian Police Air Wing based at Al Matar Air Base. It was advertised for sale in 2010 with 4237 airframe hours.
Final customer is unknown - but ZK-HVA4 has been sold offshore already.
Posted by Dave Paull at 20:54