Mit has scored the chockie fish. 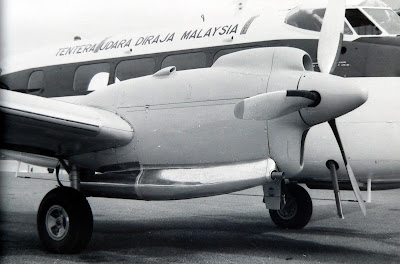 It is indeed a De Havilland DH104 Dove (Some may like to call it a Devon). 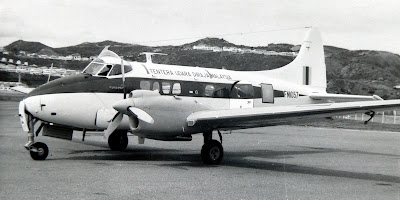 It is actually the ex RNZAF Devon NZ1825 (c/n 04419) which had been shipped to NZ and assembled at Wellington by De Havilland NZ Ltd and was taken on charge by the RNZAF on 21-10-1953. I don't believe it did a lot of flying as it was placed into storage in August of 1966 and flown to Wellington (In a RNZAF C-130) for major refurbishment by (the then) Hawker Siddeley NZ Ltd and gifted to the Tentera Udara Diraja Malasia.
Obvious modifications from its RNZAF days include the Mk8 canopy, the oil cooler and the augmented exhaust system.
It is seen here at Wellington in November of 1967. The aircraft departed from Whenuapai  on 17-02-1968 and was officially handed over to the Royal Malaysian Air Force at Kuala Lumpur on 29-02-1968 as FM1057.

Mit - flick me your snail mail address and stand by for fish delivery.
Posted by Dave Paull at 10:03