The Smythe Sidewinder was designed by former US Navy pilot Jerry Smythe and the prototype first flew in February 1969.  Later in 1969 the design won the Outstanding New Design award at the EAA convention at Rockford.  It is constructed with a welded steel fuselage that is aluminium skinned, and aluminium wings, and it was designed to withstand +/-9G.  It used a Wittman Tailwind type main undercarriage and a Thorp T 18 windscreen.  A unusual feature was the under-fuselage spoiler which was used for approach control. 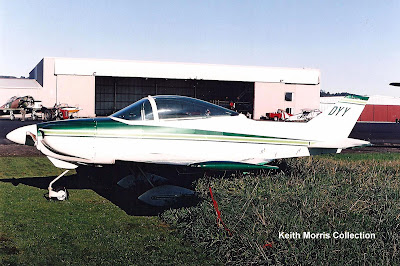 Our first Smythe Sidewinder to fly was Athol Allen Bates' ZK-DYY (c/n AACA184) which was first registered on 18/12/90 - the second new type of new homebuilt aircraft to came out of the Hawkes Bay Chapter of the AACA in 4 months.  It was sold to GR Jones of Auckland on 26/8/02 and then to H Khayami, also of Auckland, on 10/5/06.  It is photo'd above during its time at Ardmore.  Tragically, it crashed into the Kaipara Harbour in a highly publicised crash on 25/11/06, killing Mr Khayami and his passenger.  They had overnighted on the beach after a precautionary landing, and on take-off the aircraft was seen to have its under-fuselage spoiler extended, before stalling and plunging into the sea.  It was cancelled on9/6/09. 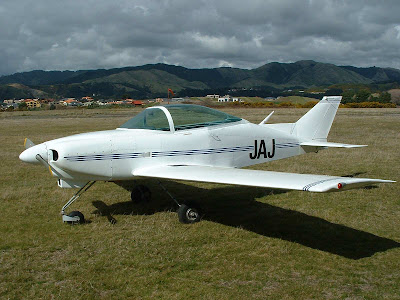 Our second Sidewinder to be completed was Jim (A) Johnson's ZK-JAJ (c/n AACA/287) which was started in 1975 and was first registered on17/6/84.  However, it was not completed until the early 2000s at the Wellington Chapter of SAANZ hangar at Paraparaumu, outside where the above photo was taken.  It was sold to SS Hayman of Johnsonville on 8/8/02. and then to Glenkit Nelson Ltd on 7/10/04.  I am not sure if it ever flew in New Zealand.  It was cancelled on 12/5/11 as exported to Australia, where it is still current as VH-DQW. 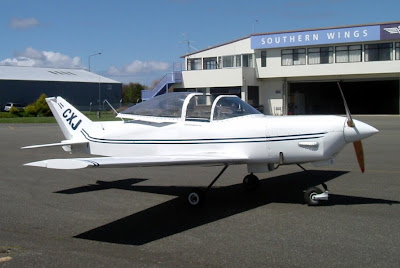 And our final Sidewinder to date is ZK-CXJ (c/n NZS 1) which was built by Bill Ryan of Invercargill and was first registered on 25/7/05.  This one is interesting as it is powered by a converted Leyland P 76 alloy V8 engine of around 150 HP.  First flight was on 2/11/07, and Bill says it flies well.  Thanks to Bill Ryan for the photo.

There has been one other Sidewinder imported into New Zealand.  N50VL was seen at Wanaka in January 2002, but I don't know where it is currently.