Grant Newman has been through Blenhiem recently, and has called into Omaka (as you do) to see how things are shaping up for Classic Fighters 2013 over Easter weekend.  The Hurricane below is stretching it for a New Zealand Civil Aircraft blog because i) it is not a  real aircraft, and ii) it is painted in a colour scheme that has nothing to do with New Zealand.  However I think it qualifies because it is INTERESTING! 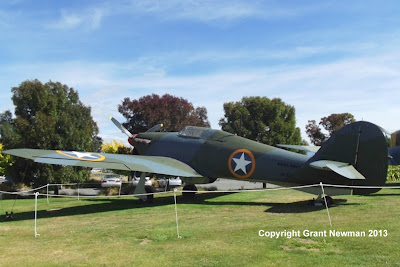 Grant reports that:  "The Hurricane has been repainted in the markings of JS327, a Canadian built Mk.XII Sea Hurricane of 804 Sqn, Royal Navy aboard the carrier HMS Dasher, wearing United States Stars as part of Operation Torch, the US led invasion of North Africa in November 1942. British aircraft wore US markings to give the impression of a US only invasion and possibly to reduce reaction among the Vichy French. This obviously didn't work as planned as JS327 was shot down by Vichy Dewoitine D.520 fighters and force landed on a beach near Oran, Algeria on 8 November 1942. The repaint has been done in support of the US theme for the Classic Fighters Airshow on next weekend".