Although slightly out of order in the list of 2 seater homebuilts of New Zealand, I include the Anderson Kingfisher here because it is quite similar to the Volmer Sportsman. Our only Kingfisher is ZK-DJH (c/n AACA/165) which was built by Mac Bettjeman of Te Kuiti, and was first registered on 15/6/79.  It used the wings off Piper Cub ZK-BKU (which was dmaged in a storm at Te Kaio Bay on 8/1/79, but was rebuilt and is still current - shades of Grand-Father's axe!). 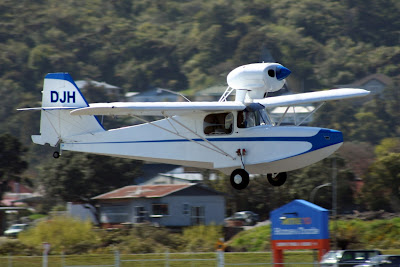 It was advertised for sale in August 2004, and ownership transferred to DR Baker of Greymouth, who rebuilt it and re-registered it on 26/4/10.  The above photo shows it being test flown at Greymouth on 14/10/10 by Evan Belworthy.  Thanks to Penny Belworthy for the photo.