Grant Porter sent in these two fabulous photographs of the RNZAF DHC-2 Beaver NZ6001 taken at Wigram by his father or grandfather in March 1959.

Photo groomed by Keith Morris.
Two views of NZ6001 taken outside the hangar at Wigram. Note in the pic below what looks like a Fairey Reed metal prop reflecting in the hangar - so perhaps the Auster NZ1707. 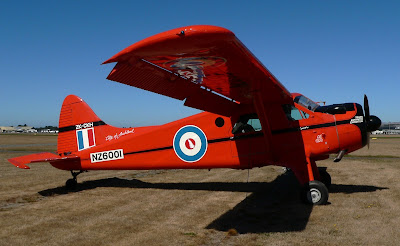 Above is ZK-CKH at Masterton on 31-08-1979 minus its ag gear.
Anonymous advises :-
When CKH was withdrawn from use by Air Services (Wairarapa) Ltd it was repainted and I think the hopper was removed. Am fairly sure that after overhaul it sat awaiting a buyer and was not used commercially. It had regular engine run ups but I never saw it fly until early 82
Below : Allan Wooller has also just sent in this view of ZK-CKH on delivery from Masterton to Auckland in 1982, still  minus hopper and outlet.
It was listed to Des Menary of Kaikohe on 02-09-1982 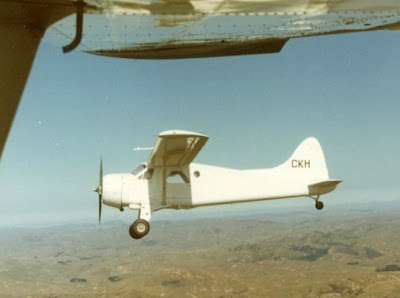