"TCE is an H-250 six seat model,(initially known as the H-250 11 Cabalerra- but soon just called the Courier 11) which was based on the H-295 but with a lengthened fuselage. It was built in 1964 by the Helio Aircraft Corporation of Pittsburg, Kansas and registered as N5446E. It is thought to have served on US Government CIA activities in South America. It soon turned up as T-110 in the Bophutaswana Air Force (seriously). When Bophutaswana was integrated into South Africa the aircraft transferred to the South African civil register as ZS-ELJ from about 1966. It was listed to Orsmond Aerial Spray (Pty) Ltd, Bethlehem on 22-02-1977. About this time it was stripped and stored pending refurbishment. This never took place. The aircraft was spotted by the present owners son, who works for Orsmond Aviation SA out of Bethlehem, and was soon purchased by Trevor Collins and shipped back to Omaka for a full rebuild. The Avco Lycoming O-540 A1A5 engine was zero houred by Aeromotive South and the Hartzell propeller by Safe Air of Blenheim. The aircraft has an all moving tailplane and the port side cockpit door opens in the normal fashion, but the rear side door open upwards and with no door post between, gives a substantial opening. The ZS registration was cancelled on 02-04-2003. " 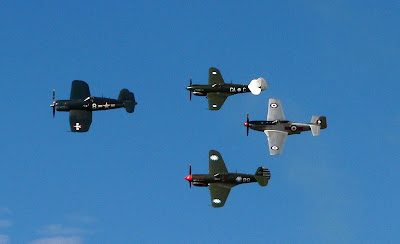 This one doesn't need much explanation. The Corsair, two P40's and the Mustang. 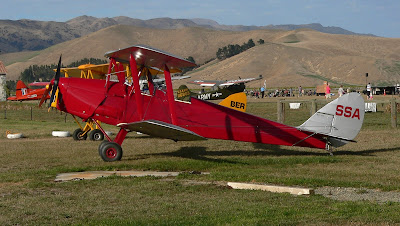 Once again I use an extract from the NZ Aviation News Magazines for some details on this Tiger Moth.

"Frank Frost of Nelson has listed this “new” Tiger ZK-SSA under the Special Category-Limited section of CAA Rule 21.203 (a) (5). I must confess to knowing very little about the previous owners of this aircraft. It was one of over 1070 Tigers built by De Havilland Australia during World War 11 and allocated the RAAF serial of A17-114. It later joined their civil register initially as VH-XGZ and later as VH-SSA and was used by Super Spread for a time. I believe it has come together at JEM Aviation at Omaka. Frank has previously operated the Yak 52 ZK-LAM between 1996 and 2006."
Posted by Dave Paull at 08:08