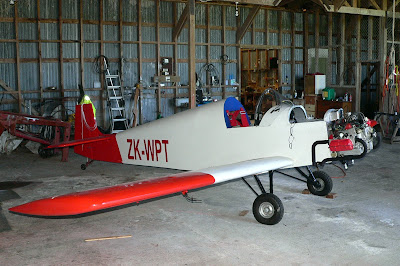 After the superb blog done by Sir Minty on all the Turbulents, plus some cajoling (and a couple of threats) I thought I'd better chuck in an update. Very new to blogging and don't really know what I'm doing so it will be basic and I hope that I can improve with time. The main purpose of it is to announce to the world and anyone that will listen, that I have just registered my Turbulent as ZK WPT. After about 6 months work, (almost full time) it is finished apart from a whole lot of ground running and testing on and off the ground. I'm just waiting for the shiny new Brent Thompson prop to arrive so that I can swing on it.
I bought this with almost all the woodwork done, from Dennis Niles of New Plymouth as a 15 year labour of love. Unfortunately health issues meant Dennis had to give up the build and put it on Trade/Me. I've always wanted to build an aeroplane as a pilot and an IA. but I'm afflicted with elastic tapemeasure disease. Wise men say, "measure twice and cut once" I can measure 10 times and get different answers each time. I believe its because they are making tape measures out of elastic. Damned Chinese. Anyhoo I needed something with the woodwork nearly done and Dennis's was just perfect. It needs all the things that I know and love to do. It has a zero timed 1600cc VW single port heads, twin carbs (off a 582) mounted on top. I've stuck to basics such as a new distributor, coil, mechanical fuel pump with electric back-up pump. AHA, I hear you say, you'll need electricity. A georgeous little Kubota alternator and a rectifier, belt driven off the back of the crank and a dinky little car battery. May fit an electric starter one day. It has all been sanded and resprayed in White with rescue red empenage and wing ends. I'll post some pickies when I figure out how. So,, Pull finger, Brent and we'll see if it'll make some noise and maybe even aviate.
Posted by himax at 23:54