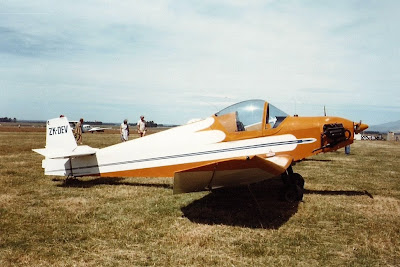 The next Jodel D 9 to be completed was John Murrays ZK-DEV (c/n AACA/117/1), which was registered on 22/5/75. John built his D 9 in Christchurch, and first flew it there on 20/12/75. It featured a Corby Starlet type canopy and looked very smart. It is photo'd here at the 1981 AACA fly-in at Pudding Hill, Methven. John sold it to MR Alexander of Blenhiem in 4/82 and it was then sold to PG Alexander of Blenhiem. By 5/84 it had been sold to C A McDonald of Dunedin, and in 1/87 it was sold to Pauline Hogue of Dunedin. It was damaged in a precautionary landing at Tairei on 25/10/87 and it was cancelled from the register on 20/9/89. Pauline Hogue also owned Jodel D 9 ZK-DBS which was also written off after engine failure at Tairei. She didn't seem to have much luck with D 9's! 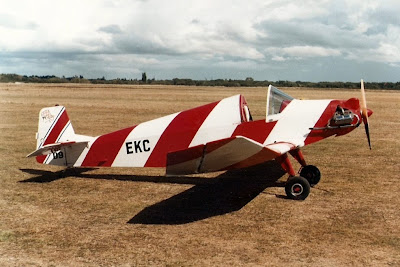 In Masterton, former motor English cycle racer Trevor Sampson built ZK-EKC (c/n AACA 278) in a very short timeframe, and painted it in this very distinctive colour scheme. ZK-EKC was first registered on 20/9/77 and first flew at Masterton on 23/12/77, flown by Alan Belworthy I think. The photo was taken at Masterton in the early 1980's and the Andy Capp figure on the tail is a nod to Trevor's English ancestry. Trevor sold it to a syndicate of Alan Ruck, Maurice Tull, Kim Twentyman and C D Winterburn in 6/85 but unfortunately it did not last long in Canterbury as it crashed at Swannanoa on 21/9/85. It was cancelled on 5/7/95. 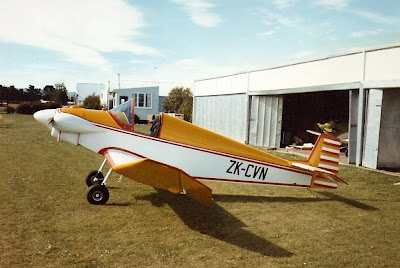 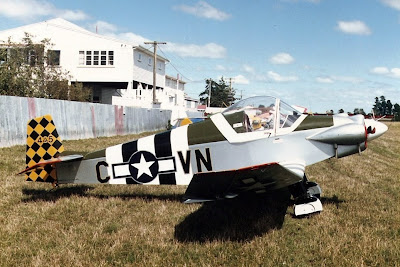 The damaged aircraft was sold to Alan and Evan Belworthy and Penny McKay of Masterton in 5/85, who rebuilt it and painted it in this pseudo military colour scheme. This photo was taken at an airstrip alongside the Masterton racecourse in the late 1980's. It was re-designated as a Class 1 microlight on 5/6/98. It is still current and still owned by Alan and Evan Belworthy, and it is hangared on Evan's airstrip at Cust. 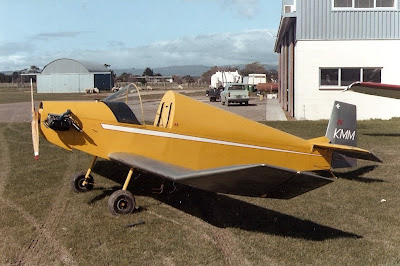 The final Jodel D 9 of this bunch is ZK-KMM (c/n AACA 283), which was built by Keith Morris over a period of 10 years at Lower Hutt, Te Aroha and Levin. It was first registered on 23/12/83 and its first flight was at Foxpine on 15/1/84, piloted by Stuart Tantrum. ZK-KMM was built as a Jodel D 9 Plus with a wider fuselage, a raised turtle-deck (so a tall pilot could fit in rather than have his head sticking out), and a taller rudder. It also had a Taylor Monoplane-style undercarriage with round tube and scissors rather than the difficult to make teardrop shaped Jodel undercarriage legs. It was quite light and it flew well with Paul Beauchamp-Legg reckoning it as one of the nicest aircraft he ever flew (and he flew a lot of types). A half share of ZK-KMM was sold to Paul Beauchamp-Legg of Queen Charlotte Sound, and Paul flew it from Omaka across Cook Strait to and from Feilding at least 38 times. It is photographed here at Feilding in 1985 before it was named "Jodie". ZK-KMM was sold to Dick Haggett of Palmerston North in 8/86. In pushing it out of the hangar for sale to Dick Haggett, with the tail lifted up and talking - the rudder struck the top of the hangar door opening and was broken. Jim Fordyce of Feilding re-built the rudder. 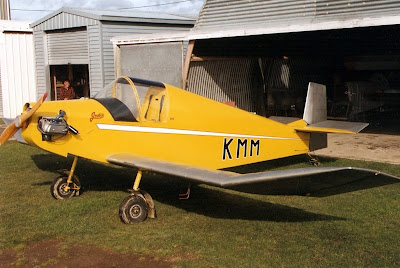 ZK-KMM languished in a hangar on Feilding areodrome for quite a few years until purchased by Rex Thompson. Rex tidied the aircraft up, re-did the registration and added a canopy, as shown outside Rex's hangar at Feilding in 1994. Rex re-designated it as a Class 1 microlight on 22/9/98. Rex sold ZK-KMM to Hayden Kappely of Waipukurau in 7/02 and it is still active in the Hawkes Bay area.
Posted by Sir Minty at 19:16