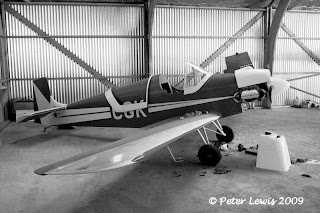 In amongst the restorations in the April 2009 CAA updates, Druine D.31 Turbulent ZK-CGK reappears.
This aircraft was one of the production batch listed by Aerocraft (NZ) Ltd. of Palmerston North in the 1970s. This aircraft was not completed at that time, and the registration was canceled in August 1977.
P J McCarty of Paraparaumu acquired the project, and apparently moved to the Auckland area soon after as ZK-CGK was seen in a hangar at Ardmore in 1982, still under construction.
The aircraft was restored to the register in January 1988 and remained active until late 1999 when the registration was again canceled.
It has now reappeared, registered to the same owner, now resident in the Papakura area.
Posted by flyernzl at 12:06