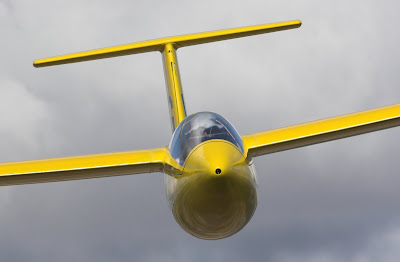 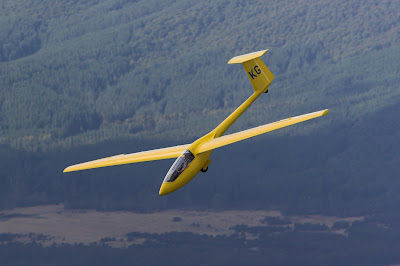 Pekka Tammi was a student at the Polytekniknikkojen IlmailuKerho RY, (which is a longer way of saying PIK) where with a bit of help from Ilkka Rantasalo and Raimo Nurminen he designed a glider to meet the recently changed 15m standard class rules (1971 - 72 we are talking here). This included the use of water ballast and wing flaps. It is the wing flaps/brakes that make this glider so different from most which tend to have what are generally referred to as Schempp-Hirth wing brakes and separate conventional trailing edge flaps. The Schempp-Hirth brakes pop up out of the wing surface (sometimes below as well) somewhere about the wing spar region of the wing. This destroys the lift over that section of the wing and increases the drag and therefore the rate of descent. The PIK on the other hand has trailing edge flaps down to about 40 degrees and beyond that - down to 90 degrees are barn door brakes. With the brakes so far back on the wing the centre of pressure moves back when they are deployed and the flying attitude changes to very nose down.
The above photo from Andy Heap shows the approach mode of GKG with it all hanging out. Full brakes and wheel down. This gives the approximately -45 degree attitude - however the flight attitude is actually nearer to about -30 degrees. A very unnerving feeling standing on the peddles for the first few flights watching the ground arriving.
Again unlike other gliders with Schempp-Hirth type brakes which can be altered +/- during the approach to suit aiming points, descent rates etc : On the PIK it is normally; once down thats it ; your are committed. So the secret for the PIK was to make absolute certain you will reach the landing field before cranking the brakes out.
It is also surprising how little round out is actually needed to plop this glider down.
Another useless bit of information is that in the PIK if you are too high on final with it all hanging down, you can actually poke the nose down even more and instead of the speed building up alarmingly as per the normal glider, the drag actually increases and the descent naturally steepens even more.
By my guess we have had 9 PIK's in NZ. 6 model 20's and 3 model 30's. Some being self launching.
I very much regret not purchasing this glider when I had the chance back in 93.
Photos lifted from the Andy Heap collection.
Posted by Dave Paull at 07:58