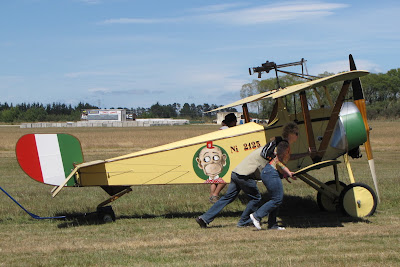 Seeing Blue Bus's post of the Graham Lee Neiuport 17 replica ZK-RFC at Rangiora got me thinking of other New Zealand Nieuport replicas, and surprisingly there have been several. The first is this Addams-Pfeifer Nieuport 11 ZK-NIM which is owned by The Vintage Aviator Ltd, who first registered it on 26/3/07. The Nieuport 11 was a baby version of the original Model 10 and was also a sesquiplane (where the lower wing is smaller and of less span than the top wing). This is our most recent Nieuport replica and is photographed here at Wings Over Wairarapa in January 2009. 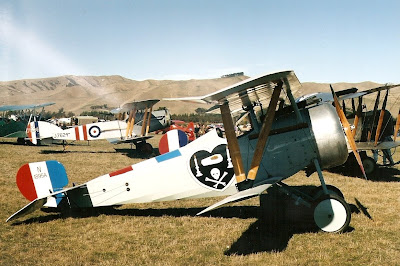 The next Neiuport replica is this Musso Nieuport 24 bis ZK-NIE, also owned by The Vintage Aviator and first registered on 16/6/05. It is ex N1893. The Model 24 is a development of the original Model 10 which was developed constantly up to the Model 27, and as you can see is also a V-strut sesquiplane. Zk NIE was photographed at the Classic Fighters airshow at Blenhiem in 2005. 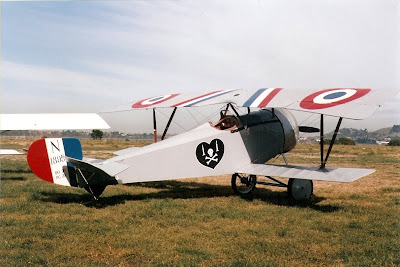 And also from my records is this this Nieuport 24 (?) microlight replica photographed at Pikes Point in 2000. From some investigation I have done, I believe this aircraft was constructed by Jack Melhopt at Timaru, but I do not know its registration. It was powered by a VW engine and was owned in Auckland by Neil Lopez. It did make a small number of flights from Pikes Point but was damaged twice and was then put into storage. Can anyone supply the registration?
There is one more Nieuport replica registered in New Zealand being the microlight Circa Reproductions Nieuport 11 ZK-WWI, which was registered on 21/12/99 and is owned by Ian Sowman of Napier. Does anyone have a photo of this aircraft? If so I would love a copy.
There is also a metal tube Nieuport replica being built at Kerikeri, which when I saw it was at a taxi-able state but with no covering.
And finally, does anyone know of any other Nieuport replicas in New Zealand?