A NZ resident since 1995, Piper PA31 Navajo ZK-FIL has departed our fair shores for Australia with it departing from Auckland for Kerikeri and Norfolk Island 12May then to Lord Howe Island and Toowoomba 13May.

ZK-FIL was imported to NZ by Hamilton Aeromotive in late May 1995 as N8051Q and was intially registered ZK-JFF. From memory, it only wore this registration very briefly before becoming ZK-FIL and moving to Sunair flying from their Tauranga base. It remained with them until it came to grief at Hawera 09Feb08 when it was inadvertantly landed wheelsup. Its ownership transferred to Air2There of Paraparaumu and the aircraft was bought back to a flying state and is seen here in April this year being prepared for its export to Australia. 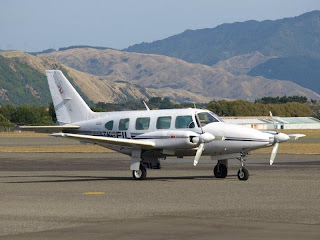