Carrying out its first flight from New Zealand soil on Monday 18 November was the "new" Bristol F2B Fighter ZK-PRK (c/n 1).  It has been under refurbishment at since late 2017 at Omaka by Jay McIntyre and his team at JEM Aviation.  It is registered ZK-PRK for Captain (later Sir) Keith Park and wears the colours of an aircraft he flew in France in 1917, coded C814.

This aircraft is one of seven that was built for a 1980s film High Road to China, but they were not used in the film, and one of the four that were imported into New Zealand in 2017 by Graham Orphan of Blenheim.  It is ex N29HC. 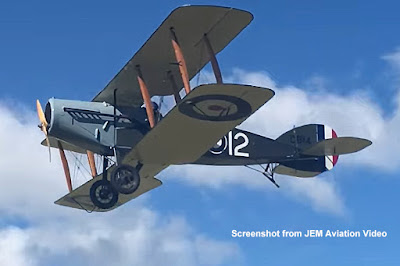 The test pilot was Ryan Southam and Jay McIntyre told me that the test flight went well.

Congratulations to all those who have worked to bring this aircraft back from the brink.