A Couple of Others from Classic Fighters

Noel Kruse is an 18,000 hour pilot and he is now based at Omaka, having come from the RAAF then the Sydney Aerobatic School then to Cambridge New Zealand in 2008.  Noel operates several aircraft and displayed a couple of them (that both have military histories) at Classic Fighters: 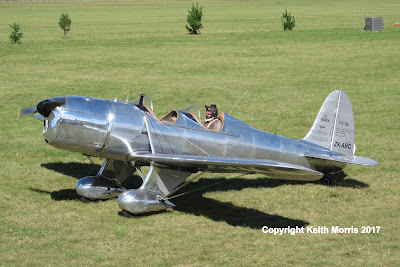 In the morning airshow Noel displayed his immaculate and highly polished Ryan STM S2 ZK-ABC2 (c/n 492).  This aircraft has its history detailed on the tail, being manufactured by the Ryan Aeronautical Company of San Diego in 1940 for the Royal Netherlands East Indies Naval Service where it was allocated the serial number S-56.  It was one of the number of RNEINS aircraft that escaped from Java to Australia ahead of the advancing Japanese in 1942 and was then operated by the RAAF as A50-29.  A more detailed history of the aircraft can be found at http://nzcivair.blogspot.co.nz/2013/12/ryan-zk-abc_21.html where it can be seen that the aircraft first flew in New Zealand in a single seater configuration, in 2013. 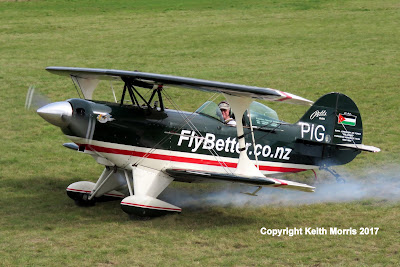 And the other aircraft that Noel displayed was his Pitts S 2S ZK-PIG3 (c/n 3005).  This aircraft also has an interesting history that is recorded on the tail, originally being flown as part of the Royal Jordanian Air Force "Falcons" formation aerobatic team from 1982 to 1992 as JY-RJL.  More of its history can be found at http://nzcivair.blogspot.co.nz/2011/12/pitts-s-2-specials-of-new-zealand_03.html  Noel was the Australian Advanced Category Aerobatic Champion flying the aircraft in 1994, registered VH-PIG at the time.

The aircraft was originally registered in New Zealand as ZK-PFA on 20/11/08 and was re-registered as ZK-PIG3 on 26/5/16.  It is hard to see in photos but the main colour of the aircraft is a dark green.  As can be seen on the aircraft Noel has written s series of books on safer flying that he provides free downloads of at his website www.FlyBetter.co.nz .
Posted by Sir Minty at 21:29