The following blurb is from this mornings Christchurch Press.
"Part three of the investigation of faults under the Canterbury Plains is under way, with a modified helicopter measuring magnetic fields in the crust around Christchurch.
GNS Science showed off the helicopter and its "stinger" probe containing magnetic-sensing equipment in Rangiora yesterday morning.
Aeromagnetic surveys show geophysicists the location of hidden faults and folds. As different rocks have different magnetic properties, an aerial survey provides a picture of the geology of the underlying rock structures that will help scientists understand more about the September 4 and February 22 earthquakes.
The helicopter will fly north-south survey lines - about 400 metres apart - from Kirwee in the west to Lyttelton in the east, and from Lincoln in the south to Rangiora in the north. Cross- lines will also be flown with a four-kilometre spacing.
GNS Science senior research scientist Bryan Davy said the survey began yesterday. It was expected to take about a week."
THE PRESS.
Below are two long lens shots of ZK-HDN passing over Christchurch Airport during run number 61 this afternoon (19-05-2011).
McDonnell Douglas 500N ZK-HDN3 c/n LN080 has been with Central South Island Helicopters Ltd since 19-01-2007. 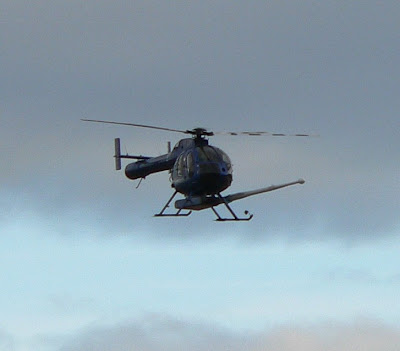