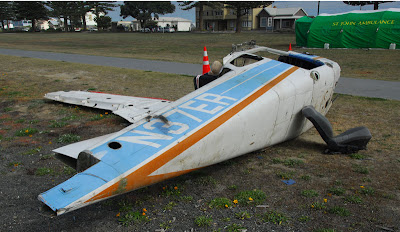 The remains of a this Cessna 172N are kept in the Napier area and hauled out on occasion to support emergency and rescue demonstrations and exhibitions. These photos were taken on Marine Parade in April 2009 by JEAN210.

Rather surprisingly, the source of this hulk is the United States. Even more interesting is that N37ER (msn 17269534) suffered an accident at Salida, Colorado, on 18 July 1983, when it encountered downdrafts after crossing Ruby Mountain at 9,900ft and made a forced landing on a sloping, rocky meadow at an elevation of 8,200ft. The nose wheel collided with a boulder and over went the aircraft. Fortunately, pilot/owner Kenneth P Smith and his wife escaped uninjured.

The wreck was shipped to NZ as a spares source, or ?
Is this wing from the same aircraft ? 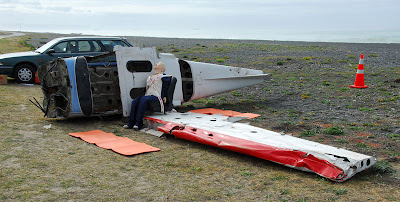