Another rare aircraft from Don Noble's collection is our one and only (to date) Tipsy Nipper, ZK-CAP.

The Tipsy Nipper was designed by Ernest Tips and as a Mk 2, ZK-CAP was manufactured by Avions Fairey of Gosselies, Belgium.  The name Nipper was reportedly the nickname of Ernest Tip's first grandchild.  It was constructed with a metal tube fuselage and wooden wings, all fabric covered, and was aerobatic.  It was powered by a 1500 cc 42 HP Starck Stamo motor which was a Porsche engine converted for aircraft use. 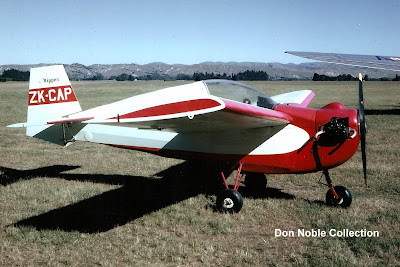 ZK-CAP (c/n 36) was ex OY-AER and VH-CGB, and was first registered in New Zealand to Aircraft Hire Ltd of Masterton (owned by Clive Thorne), on 10/7/61.  It was damaged on its second flight from Masterton in June 1961 while still wearing its VH registration, when the spinner came off and damaged the propellor and the port undercarriage leg was torn off in the ensuing forced landing.  However it was rebuilt as can be seen in the above photo taken at Masterton.  It was damaged again in 1962 and it was cancelled from the New Zealand register on 20/11/62.  It was returned to Australia where it was rebuilt as VH-CGB.  It crashed again at Parafield in April 1979 and was cancelled from the Australian register in the same month.  However, it popped up again on the British register on 2/9/10, registered as G-NIPS, and it is still current.

Steve Chilcott of Auckland who built Jodel D 18 ZK-SCJ and is building a Menestral, has a Tipsy Nipper in the country as his next aircraft project, so we may well see another Tipsy Nipper on the register.