Jean210 has sent me a photograph of ZK-AUJ taken just prior to is demise in about mid 1984.
So here are a few more pics of the lovely old girl.
Below is ZK-AUJ from the Ed Coates Collection.

This ex RNZAF (NZ3530) Douglas C-47B-15-DK was seconded to the New Zealand
Civil Aviation Administration Department in 1950. It flew with this government arm until
1971. In 1973 it was brokered by Australian Aircraft Sales and wound up in Cambodia.
The above is the blurb that comes with Ed's photo.
As I understand it : This aircraft served with the RNZAF as NZ3530 until struck off charge at Woodbourne on 04-06-1952. I also have it that it was allocated the ZK-AUJ civil registration on 18-04-1952 and listed to the N.Z. Civil Aviation Administration. (ie before it was SOC from the RNZAF).
Below is a view of her at Invercargill on  23-04-1968. 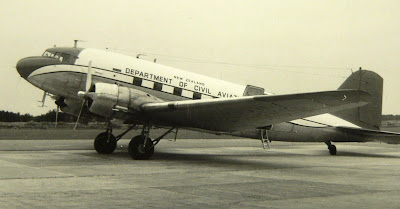 From the original post on ZK-AUJ (at  http://nzcivair.blogspot.co.nz/2008/06/i-remember-when.html  )
I wrote:-
I remember when the Department of Civil Aviation operated two Douglas DC-3's on airways calibration duties based at Paraparaumu (In what is now the Helipro hangar)
If you were in the know, it was possible to cadge a ride for the day (or longer) on what were classed as Famil Flights.
You had to pick your day with care as the continual turning combined with other meteorological phenomena could lead to periods of unwellness.
Here we are at Invercargill on 23rd April 1968 in ZK-AUJ c/n 26651/15206.
It was delivered to the RNZAF on 30-12-1944 and became NZ3530.
It joined the ZK register on 18-04-1952 with CAA, then relisted to DCA and finally to MOT CAD Division after departmental reorganisations.
It was sold in 1973 having been replaced by Fokker F27's.
It departed Auckland on 20-06-1973 and spent about six weeks in Australia before moving to Cambodia to become XW-TFJ.
I heard that it "escaped" from the Pol Pot clutches and flew into Don Muang in April of 1975 for storage and was broken up in the mid 80's.
The original B & W photograph was re-photographed with my digital camera and appears above unedited.
Below we see her at Paraparaumu on 01-02-1971. 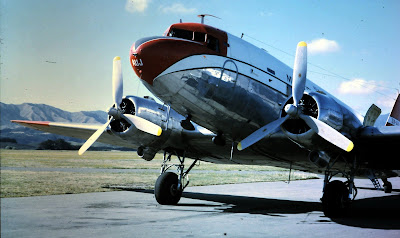 And then on 11-06-1973 I captured it at Mangere, somewhat tired looking. It departed for Australia some nine days later. 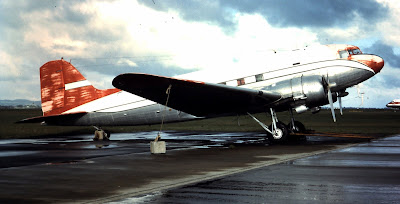 Below is a nice shot from Peter Lewis of ZK-AUJ in Australia between June and August 1973 with the Australian Aviation Sales logo behind the cockpit.

Below is the photograph sent in by Jean210 showing XW-TFJ at Bangkok's International Airport at Don Muang in May of 1984.
It was last operated by Senaki Peanich Airlines (Air Union previously). 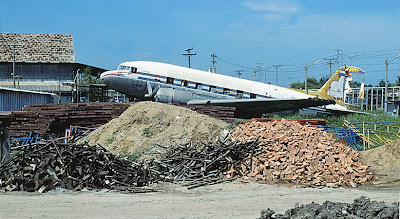 Soon after this photo was taken, I understand it was bulldozed as fill for a new ramp area--visibly surrounding it in construction mode.
Posted by Dave Paull at 21:36