Before proceeding with this post, I want to extend my sympathies to anyone reading the blog from Christchurch, and to Blue Bus: I pray that all is well with you and your family.

Flyernzl was right in saying that Parakai was a magnet for gyrocopters. In fact there were 9 of them there, and I post some of them below. 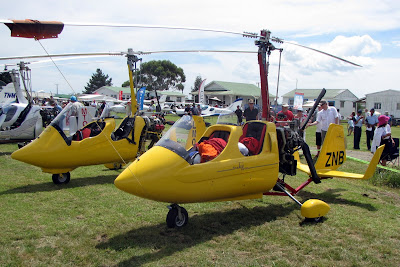 The Carpenterie Pagotto Brako Gyro ZK-ZNB is manufactured at Pianzaro in Italy by what was originally the Pagotto Carpentry Company (who started of manufacturing fences and gates!) It represents yet another type of European gyrocopter, all of them variations on a similar theme - 2 seat tandem, with a Rotax 912 or 914 motor and streamlined enclosed bodies, and with obviously good cross country capabilities (although I think ZK-ZNB probably came from Kerikeri rather than Central Otago). 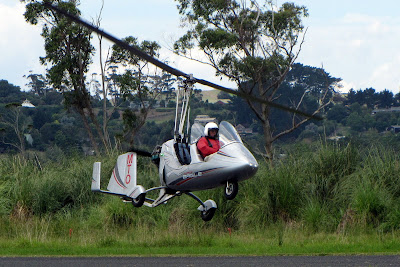 And the German equivalent is the Eagle MT 03 gyrocopter manufactured by Autogyro GmbH at Hildesheim in Germany. Here Gyrate NZ's ZK-MTO is put through its paces in a spirited display. 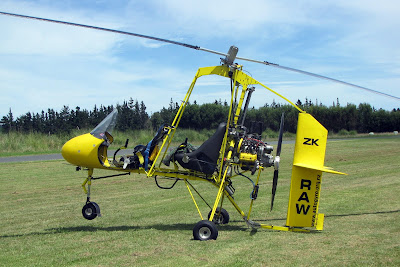 Next, Rotorflight Tandem Dominator ZK-RAW hails from Taumaranui. It was originally ZK-RAM built by W B Black of Te Anau. 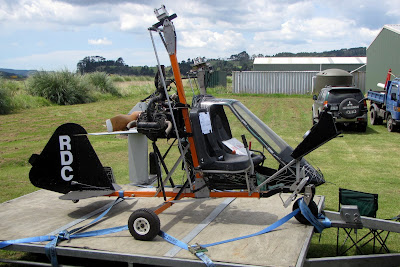 Next is a classic Bensen B 8M gyrocopter owned by G L Woodward of Silverdale. (I should have taken the photo from the other side as the lines of the Bensen get rather swallowed up by the gyrocopter behind). 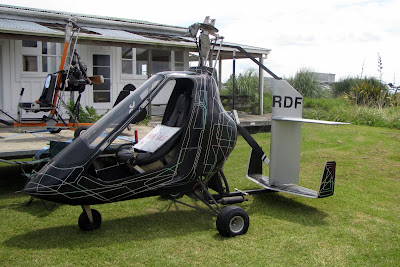 And finally this Rotor Hawk Falcon 1 ZK-RDF, also owned by G L Woodward. Both of these last two gyrocopters were for sale, and maybe they have been inactive because neither had rotor blades fitted.
The other gyrocopters there were Oskar Steilau's MT 03 Eagle ZK-RBG and UFO Heli-Thruster gyrocopter ZK-RIG and Calidus Fern ZK-ZMM as posted by Flyernzl. All very interesting.