Taking to the skies of northern NZ today, 3 February, was recently delivered King Air 350GTi ZK-MMM/2 (FL-727).  The aircraft was delivered to NZ back in December as N80427 and arrived at Nelson from Sydney and Auckland on the 19th of that month.  The next day it flew to Ardmore for further work at Hawker Pacific's and became ZK-MMM on 19 January 2011 registered to Woodlands Services of Nelson who will apparently trade as Golden Wings providing top end tourist charters.  I believe today was its first flight with its ZK markings.

The first ZK-MMM was a King Air C90GTi with this aircraft spending a very short time on the register between 9 July 2010 and 22 October 2010. 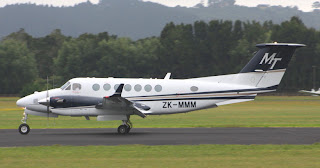