Updated with addition of photo - still looking for a more recent image.
Arriving in New Zealand back in 1983 was Cessna T207A ZK-SEX for Air Safaris. It remained with the scenic flights operator at Tekapo until September 2002 when it moved to a similar operation out of Wanaka and later to Queenstown. It departed from Kerikeri for Norfolk Island today and then to Lord Howe Island 11 July with its ownership being changed on 14 July to Horsham Aviation of Victoria on 14 July. 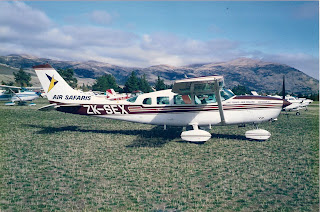 Can anyone provide a recent image of this aircraft? Please email mikeskj@xtra.co.nz, thanks.
Posted by MRCAviation at 01:08