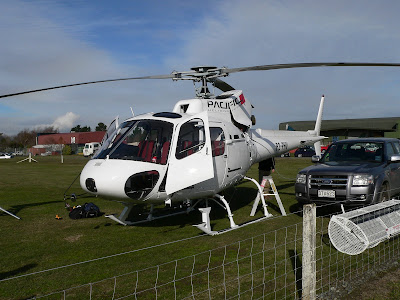 - RPQ2 on 07-03-06. With them it became "Firebird 284" during the bush fire seasons. Its VH registration was cancelled on 11-03-2009 for its move to New Zealand where it became ZK-HDK3 on 26-03-2009 for Heli Support New Zealand Ltd of Wanaka.
I noted it in their hangar at Wanaka mid December of 2009 parted out with the fuselage in a jig with BA mods being carried out. (It was officially re designated as a AS 350 BA a few days ago on July 5th). During reassembly it was refitted with items supplied by its new owners who operated a large number of helicopters in the PNG region, and who retain a large stock of spare/replacement items (engines/gearboxes/rotor heads/blades etc). Instrumentation was also fitted to suit Pacific Helicopters requirements.
I caught up with it again on Wednesday the 7th parked at Garden City Helicopters in Christchurch being readied to place into a container for shipping to Australia. From there it will be flown up to PNG.
As you can see it is now marked as P2-PHV. Its ZK marks being cancelled today (09-07-2010). 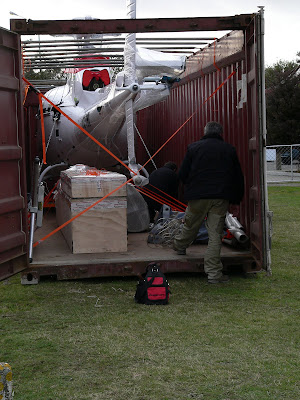