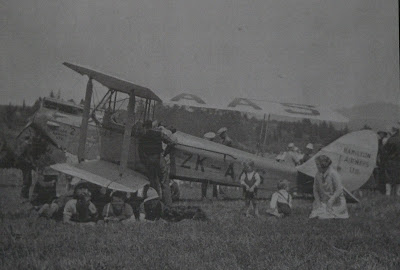 The above shot is a copy of a photograph on display in the Collingwood museum.
It is listed as "McGregors' Gypsy Moth at Rockville 1930".
Rockville is about 5 or 6 clicks southwest of Collingwood; heading towards Bainham.

DH.60G Gipsy Moth ZK-AAS c/n 1111 appeared on the NZ register in August of 1929 with Hamilton Airways Ltd after import by the agents Air Survey & Transport. In the above photo it carries the fleet number 2 and has some other script on the engine cowling. By November 17th of 1930 W L Oldham appears to have been the operator; It was damaged at Mangere on (next day) 18-11 1930. It was obviously rebuilt following extensive damage. It went to the Wellington Aero Club on 04-01-1933. It suffered some damage at Rongotai on 02-09-1933 but was finally cancelled following extensive damage inflicted during a forced landing near Cape Campbell on 25-12-1936.

P.S. Lying in bed last night and reading the latest copy of NZ Aviation News (as you do) I came across a brief mention of this aircraft in the "Air Mail" section.
Posted by Dave Paull at 21:48